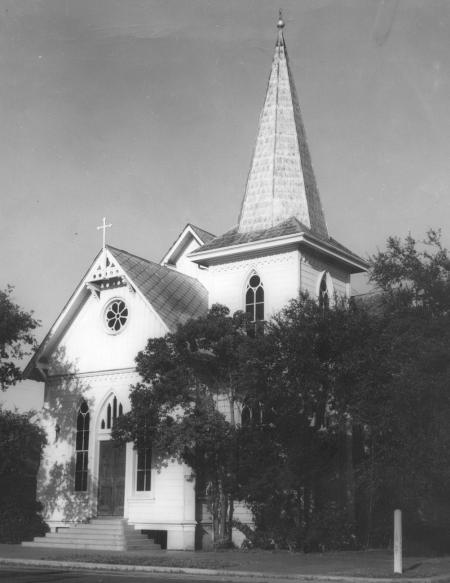 The first Greek immigrants to arrive in Galveston, worshiped with the Serbians and the Russians at the Sts. Constantine and Helen Church at 4109 Avenue L. These brave people who were to become the nucleus of the present colony of Greek-Americans,deserve our highest praises for their courage not only in coming to a new land, but also for their dedication to their faith, their high hopes for the future, and for surviving in the face of all the problems that confronted them during those difficult first years on foreign soil. We must remember that in those years many of these men were unmarried, some poorly educated, no social status in the community, no social organizations open to them, and dependent on traveling Greek priests for their religious needs.

When the Greek community decided to have its own church, the records reflect that in April, 1933, the first General Assembly was held. At this historic meeting the present name, “Assumption of the Virgin Mary”, was chosen. The following were elected to the first Board of Trustees: President, William Laros; Vice-President, Gus Economides; Secretary, Mike Nelson; Treasurer, John Economides; Trustee, Theo Christie.

As a result of the organization of the church board and parish, a decision was later reached to purchase for $7,500.00 the Evangelical Lutheran Church on the northeast corner of 19 and Ball, now the site of the present church and related buildings. This was an old but sound framed structure, and it later turned out to be a very fine purchase considering the central location, proximity to downtown, across from the courthouse and related county buildings, and a generally improving neighborhood. The Holy Synod, then headquartered in New York City, was requested to provide a priest to serve this parish, and on March 15, 1934, Father D. Zikakis performed his first holy liturgy in the now all-Greek Orthodox Church. Between that date and the year 1963, the following priests served this parish: Father G. Scoltis, Father Georgiaddis, Father J. Mercuris, Father J. Nanopoulos, Father C. Nicholas, and Father Andrew Daregas.  Meanwhile, the parishioners slowly improved the appearance of their church with beautiful icons, crystal chandeliers, temple, electric organ and other religious items. In addition, a frame rectory for the priest’s families, and a frame community hall were added to the church property, all on the two-lot corner owned by the parish. The old frame community hall served for many years as a meeting place for parishioners, their social and fraternal organizations, the teaching of Greek, Sunday School classes, and for entertainment. In its last days, before it was sold and moved off the premises, it was even used for church purposes.

In 1951, a very small fire scorched a portion of the floor and walls of the church. While not serious, it turned the minds of the church board members toward constructive thoughts– the building of a new, air-conditioned and more modern church and community center. A special committee was appointed in 1951 and a decision was made to first construct a Community Center building where the old frame “hall” was located, and to use this new, modern structure to gather financial strength to later construct the church edifice, each building to compliment the other, in fact to be connected so as to look as if they were built at the same time. Members of the committee included: Mike A. Loomis, Chairman Building Committee; John A. Mehos, Chairman of the Ways and Means Committee, and others as follows: Thomas Laros, Steve Miller, Dr. M.A. Caravageli, T.A. Waterman, Gus Kriticos, and Gus Economides.

On June 12,1955 the cornerstone of the Community Center was laid. Mrs. Cornelia Lymberis. a widow who had recently moved to Galveston, paid for the honor of laying the cornerstone. This fine hollow-tile, brick-faced, one story building provides three classrooms, a fully-equipped kitchen, large auditorium and stage,  two restrooms and office. Principal contributor whose generous donation really “got the ball rolling”  for the construction of the Community Center was the late Angelo Caravageli.

While paying off the mortgage on the new building. the parish continued holding religious services in the old frame church on the corner of the lot. Meanwhile disliking debt, members focused their attention on paying off the mortgage, and with their new Community Center it was one fund-raising affair after another. Soon Galvestonians became well-acquainted with Greek pastry, Greek food, Greek dancing. Greek entertainment, and other customs of the “Happy Greeks”, to which the mortgage was paid off years ahead of schedule.

In 1963, just 9 years after completion of the Community Center, a new committee consisting of the church board, took over the task of building a new church. Headed by George Marinos as Chairman, and Peter Comits as his first assistant, the church board acting as a building committee, included the following: James G. Stathakos, T.A. Waterman, S.G. Pappas, Mike A. Loomis, Chris Metsikas, Paul Santire, and John A. Mehos. On September 27, 1964, the cornerstone of the new church was laid. Offering the highest sum for the privilege of participating in the laying of the cornerstone were members of the Caravageli, Mehos and Agalou families. Offering the highest cash “bid” for the honor of unlocking the door of the new church, was Peter Douvry. His Grace, Bishop Silas of the Eighth Diocese officiated at the architectural liturgy on October 18, 1964. Parishioners and guests were amazed at how so inexpensive a church building could be so beautiful: however, the frugal board and committees had carefully removed the rich, old icons from the old church, had also removed the crystal chandeliers and installed these items in the new building. The basic air-conditioning system for the Community Center was made to serve the new church as well.

On February, 1964, Rev. Father Charles K. Anastassiou started his 31 years of service to our community. He enhanced the wonderful efforts of our community leaders by becoming very dynamic and popular in our Greek community as well as the entire city. He remained with our community until he died on April 2, 1995. In the next 10 years, Father George Thanos and Father David Eckley served our parish as part time Priests.

On February 2006, Father Michael Platanis and his family arrived in our community. Father Michael performed his first service at our Church on February 12, 2006 as a full time priest. He was accompanied by Presbytera Maria and his five children Elisabeth, Athan, Roman, John & Anna. On September 13, 2008, Hurricane Ike devasted our building. Our community was spread out over the entire area, worshipping at various Orthodox churches. Many parishioners worshiped at the Russian Serbian Orthodox Church here in Galveston. In May, 2009, Father Serge Veselinovich began services at our Church. We shared him with the Russian Serbian Church. Father Serge has brought joy and hope to our community.

Father Stelios Sitaras came to the church in December, 2012, celebrating his first liturgy at the Assumption of the Virgin Mary Greek Orthodox Church Sunday morning, December 30, 2012. The church has been truly blessed to have to him to lead us into the coming years.